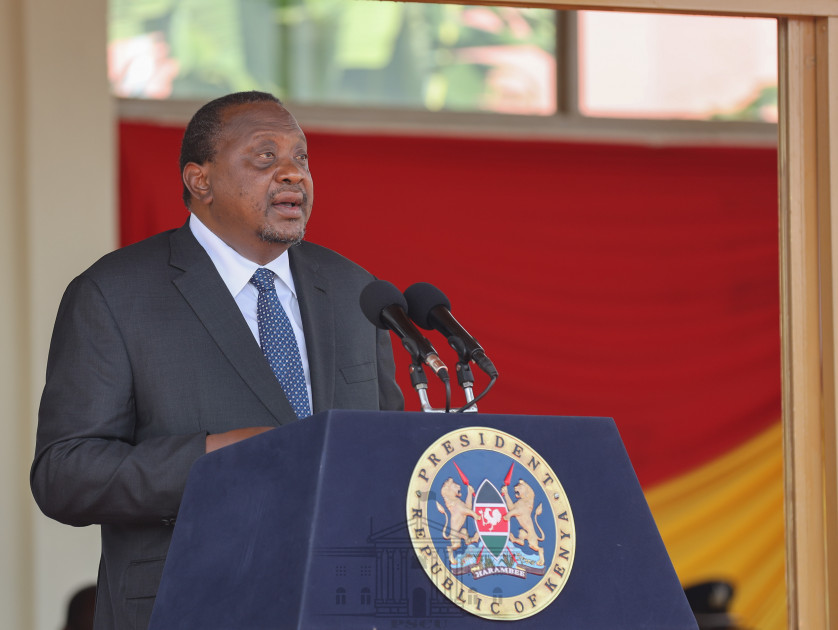 President Uhuru Kenyatta has overseen large-scale changes in Kenya’s national budget over his two terms. Some ministries have seen their allocation more than triple during this period

On March 9, 2013, Uhuru Kenyatta was declared the winner of Kenya’s presidential election,  ushering in new leadership in a devolved form of government.

As such, the President’s first budget was highly anticipated as it was the first time the country would see funds allocated to the newly formed counties.

Kenyans remained optimistic that the new administration would take up the ‘economic development baton’ handed over by the then-incumbent president, Mwai Kibaki.

President Uhuru and his deputy William Ruto were tasked with revamping economic growth and delivering on the promises made to Kenyans during the campaign trails such as job creation, improved health care, and the creation of a vibrant environment for businesses (small and large) to thrive.

However, these growth rates were still well below the growth rate of 10% per annum envisaged in the Kenya Vision 2030 national development blueprint.

With this in mind, the Jubilee government identified six priorities that it would focus on, with these priority areas also reflected in President Uhuru’s first budget.

The 6 Areas of Priority Were:

1. Creation of a lean government.

3. Creation of meaningful jobs across the country.

6. Reinvigoration of the private sector.

The Minister of Finance at the time, Henry Rotich then went ahead and factored in all the above when he tabled President Uhuru’s first budget which totaled to Ksh1.64 Trillion.

The total spend for this period was spread out as detailed below:

CFS is a mandatory spending by the National Government. It includes repayment of public debt, payment of pensions and gratuities as well as payment of salaries and allowances for constitutional officeholders.

As seen above, the Jubilee administration dished out the biggest pieces of the national cake to Education (27%) and the Energy sector (22%).

For business and investors, the national government promised to: Expand access to energy, water, and development of other infrastructure; Invest in a first-class road network, railways, ports, and harbours, dry and wet cargo storage, fish landing, processing, and storage, waterways and ICT in order to reduce the cost of doing business; and implement an efficient port clearance system – The National Single Window System by October 2013.

When it came to tax reforms during President Uhuru’s first year, the following proposal’s stood out;

Flash forward to April 2022 and CS Finance Ukur Yattani’s latest budget offers a chance to make direct comparisons, and assess the areas that have seen the greatest changes in terms of budget allocation.

Yattani tabled a Ksh3.3 trillion spending plan for the 2022/2023 fiscal year with a focus on accelerating economic growth. This is Ksh1.7 trillion more than the budget his predecessor tabled during President Uhuru’s first year - a 103% increase.

The 2022/23 budget came at a time when Kenyans were grappling with a skyrocketing cost of living, characterised by a fuel crisis and the highest cost of basic foodstuff such as maize flour ever witnessed in the country.

The Finance CS was also tasked with finding a remedy for a country that lost 1.7 million jobs in 2020 due to the Covid-19 pandemic.

The total spend for this period was spread out as detailed below:

When it came to tax reforms during President Uhuru’s last year, the following proposals stood out.

Proposed expansion of the nature of assets that may be used as security to include ships, aircraft, motor vehicles, and any other properties. Under the current law, KRA can only use land or buildings owned by a taxpayer as security for unpaid taxes.

Income Tax Act – CS Yattani proposed to expand the scope of allowable deductions to include cash donations made to charitable organisations that are not registered under the Societies Act or the Non-Governmental Organisations Co-ordination Act.

This has been lauded by taxpayers who make donations to non-registered charitable organisations and who do not currently benefit from having these donations treated as tax-deductible.

New proposal to tax the gains accruing to non-residents from transactions involving financial derivatives in Kenya including hedging, contract futures, and contract options.

As for exemptions, CS Yattani raised the following points during his presentation in the National Assembly.

There was a proposal to expand the scope of products that are exempt from excise duty to include:

The CS proposed to expand the list of VAT exempt supplies to include:

On the other hand, the CS proposed a 15% excise duty on fees charged by television stations, print media, billboards, and radio stations for advertisements related to alcohol consumption, gambling, and gaming.

During the presentation, the country’s finance Head stated that Kenya graduated from a low-income to a lower-middle-income country with an estimated per capita income of Ksh244,099 in 2021.

It was a tough balancing act for CS Yattani as he presented the last budget under the watch of President Uhuru.

The Finance CS proposed an amendment to the Public Finance Management Act to allow for increased borrowing to ease the growing expenditure pressures.

While ensuring that the limited funds are available to finance the 2022 General Election, and complete the implementation of the Jubilee government’s legacy projects in agriculture, manufacturing, housing, and health sectors.