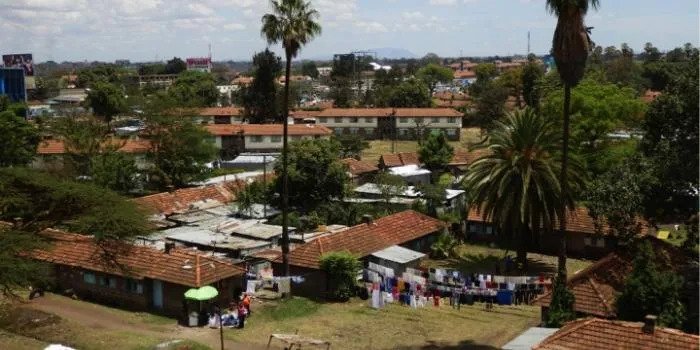 Strange as it may sound, hundreds of residents in Nairobi fork Ksh3,500 on average per month as rental expense for a 2-bedroom stand alone house, complete with its own compound.

They live in a select group of estates just a stone-throw away from the Central Business District. The original affordable housing project if you may.

These estates include: Jericho, Ziwani, and Kaloleni, which are all managed by the defunct County Council  of Nairobi (now County Government of Nairobi).

Speaking to a resident of Kaloleni – located 6.5km from the CBD, we got to understand how they have been able to enjoy rental rates that cannot be matched anywhere in and around the Kenyan capital.

Most Affordable Neighborhood in Nairobi

Originally designed in 1927 and completed by 1948, these bungalows were gifted to African soldiers who fought for the British army in WWII.

They have since been passed down through generations, which helped greatly in maintaining its original design.

With no flats in sight, as is the trend with almost all Nairobi estates at the moment, Kaloleni streets are lined with an array of gigantic trees that run along all the interconnecting streets throughout the neighborhood.

From palm trees to the jacaranda that turns the entire neighborhood into a sea of purple in full bloom.

There are also several recreation grounds such as a handball pitch that also hosts football matches, as well as a social hall whose history runs as deep as Kenya’s own history.

Dubbed the theatre of Kenya's fierce struggle for independence, Kaloleni Social Hall has played host to the likes of Apolo Milton Obote and Tom Mboya in the 1950s, as they pushed for the country’s independence.

The hall currently hosts a gym as well as a fully stocked library.

Despite the estate’s rich heritage and social amenities, the estimated 300 tenants have enjoyed what can be argued as the most affordable rental rates in Nairobi.

“I make my monthly payments to City Hall at the end of each month and this has always been the case,” a resident disclosed.

She further explained that they don’t have a say when it comes to rental reviews, however, she went on to explain that they have never had reason to raise up arms as the status quo has always been maintained.

However, finding a vacant house is near impossible.

Nairobi’s housing crisis has been the subject of endless conversation, with millions of Kenyans terming some of the rental rates as beyond exorbitant.

This explains the current phenomenon involving hundreds of thousands of Nairobi residents moving to the city’s outskirts, where rent is relatively cheaper.

City Hall owns about 17,000 units in these estates where a one-bedroom apartment could attract a monthly rent of between Ksh3,500 and Ksh20,000 depending on the location.

Many occupants have found ways to take advantage of the ridiculously low rent rates, renting out the apartments to secondary tenants at about three times the ‘kanjo’ rate.

Others have capitalised on the large open spaces to build semi-permanent structures, mostly single rooms that are rented on an average of Ksh4,000 depending on the location.

This fairy tale may, however, be soon coming to an end as the Nairobi Housing Urban Renewal programme takes shape.

Run-down ‘kanjo’ estates have been earmarked for upgrades in a public-private partnership expected to increase the availability of affordable housing as well as better sanitation standards.

The national government has recently stepped up in its push for affordable housing.

The Park Road project was the first low-cost housing development to be completed by the national government under the Big Four’s 500,000-unit Affordable Housing Programme.

Similar projects are also currently underway in Shauri Moyo and Starehe Estates , which will bring in another 8,000 units.

The key difference between the current government's affordable housing project and the model employed in Kaloleni is in the ownership structure.

While the Jubilee Government's houses are under a lease to own structure, the likes of Jericho and Kaloleni residents don't have such a deal in place.

Nairobi is one of the most volatile urban centers in Africa, with about 60% of its population living in crowded and poverty-stricken informal settlements around the periphery of the city.

Efforts to upgrade Nairobi's slums have been attempted by the Government for decades, using different theories and strategies ranging from forced eviction and demolition to the current affordable project.

The verdict on the affordability of the houses currently under construction has not been handed out yet.