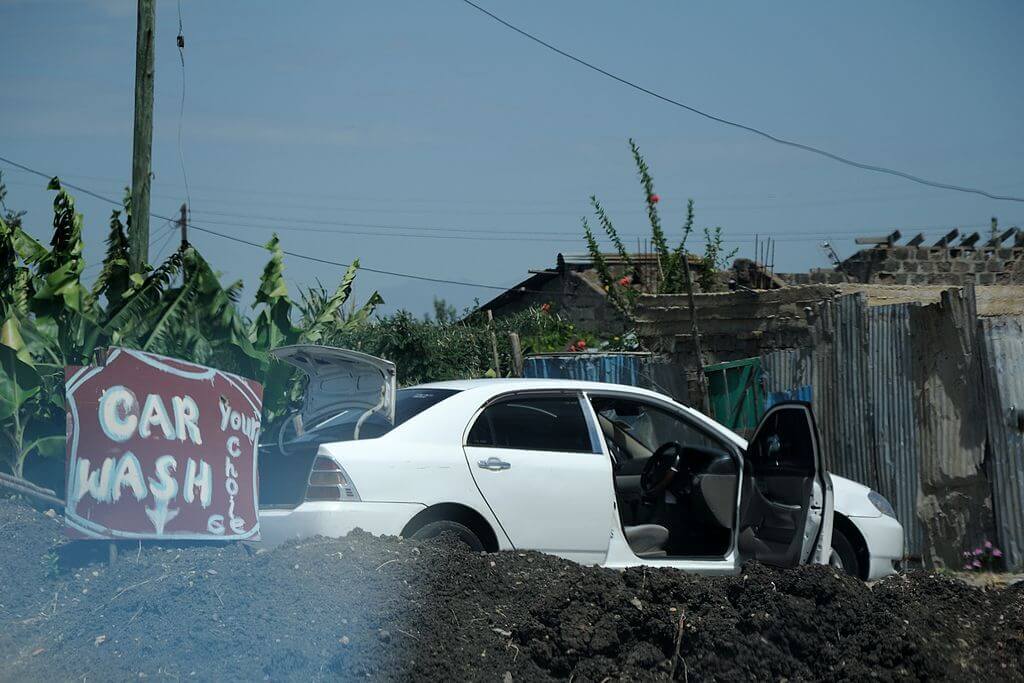 Following the Covid-19 pandemic, Kenyans have been forced to come up with new ways to earn a living.

With over two million Kenyans having lost their jobs in 2020, it was inevitable that new business models would crop up across the country, moreso in the Kenyan capital.

By August 2020, at least 1.7 million Kenyans had lost jobs as the country’s economy contracted due to the pandemic, affecting various key sectors, a Kenya National Bureau of Statistics (KNBS) report released in September 2021 revealed.

This could explain the new trend across the city involving services tailor-made to the convenience of clients.

Some of these new businesses are set to shake up the status quo, with clients now used to the new norm.

The business is basically a carwash being moved to the convenience of one’s apartment.

Unlike the night shift askari who gets Ksh100 to Ksh200 to try and give one's car a proper clean with as little water as possible, these new breed of mobile car wash entrepreneurs seem to be focused on creating value.

They move around with a small portable pump and vacuum cleaner to ensure they can offer clients any of the services available at a traditional car wash.

For the business owner, this seems like the future as they get to save a substantial amount of money that would have been used to pay for space, water and electricity had they been set up as a traditional car wash.

Prices for these services start at Ksh400, depending on the type of car as well as client demands e.g. vacuuming, engine wash and so on.

Walking around most neighborhoods in Nairobi on weekends, it is more likely than not that you will run into a kid’s entertainer of some sort.

During the pandemic, shrewd Kenyans realized the potential that lies in packaging something for kids who could no longer visit fun parks due to Covid-19 restrictions.

This informed their decision to invest in items such as bouncing castles, inflatable slides and clown tools.

Hiring a basic bouncing castle for a single day costs anywhere from Ksh6,000 to Ksh9,000, depending mostly on size and design.

The entertainers are an ever-present feature during kids’ parties around the city.

They also make substantial savings on costs such as rental space and electricity, as they set up within residential apartments, thus boosting their profits.

This has to be one of the most profitable undertakings, especially during the pandemic as more and more Nairobians opted to to order in.

From success stories on Twitter where individuals such as the famous chapati mistress have seen demand for their food skyrocket since the pandemic, to motorcycle riders making a killing ferrying food across the Kenyan capital.

Food vendors are currently receiving orders not only from workers in the offices but families and those working from home.

From the convenience of your phone, you can search for any kind of food you crave and you’ll find hundreds of options from vendors strewn around Nairobi.

Unlike other businesses that suffered from the economic fallout caused by the spread of Covid-19, the food business has remained steady thanks to change of customer preference. Home delivery is surprisingly becoming less of a luxury.

On a good day, most sell at least 100 plates for between Ksh300 and Ksh1,000 depending on the ingredients needed for any particular order.

Grocery delivery services are also becoming a mainstream offering in urban Nairobi with a significant rise in first-time users of online services since 2020.

Virtual restaurants are here to stay.

E-commerce boom and the positive effects of Covid-19

While Nairobi has always led her East-African neighbouring cities in embracing technology, the effects of the Covid-19 pandemic on E-commerce have been unprecedented.

Besides food, the lockdowns and containment measures opened the floodgates for experimentation by Nairobians, who hitherto would have been sceptical of online purchases.

From beer, shoes, medicine, electronics, apparels, to newspapers and agro-inputs as well as insurance policies, there has been a sustained surge in the confidence of Nairobians in the reliability of shopping online.

Entrepreneurial Kenyans reeling from unanticipated income reductions did not take long to realise the opportunity and hop in with tiny, small and sizeable online businesses. Tapping into existing savings, many created and promoted online storefronts that would become a major revenue earner.

As courier companies thrived, so did small traders whose small businesses were at risk of being wiped out by the pandemic. Employees working from home too have had a chance to experiment with online side-hustles with varying degrees of success.

Over the last year, content creators have been making a killing as more and more Kenyans switched to the online space.

From viral videos turning people into overnight celebrities, who then go on to become high-earning influencers, to turning mainstream news into parodies, you name it.

Take Terrence, the man who turned the whole of Nairobi into a ngamwaya kemikal speaking capital.

The key in this field is consistency in terms of churning out content, and the actual quality of the content. If it’s relatable to the everyday Kenyan, it will sell more often than not.

The blossoming online space in Kenya has led to the rise of comedians such as Crazy Kennar and Cartoon the Comedian -who both command an audience in the hundreds of thousands on YouTube.

Social media influencers are also the current toast of the town when it comes to campaigning for some of the biggest companies in Kenya.

According to a 2020 survey published by Hopper HQ -Instagram planning and marketing tool, TikTok star Azziad Nasenya was ranked at position 28 in Africa, charging $5,000  (Approximately Ksh550,000) per post.

The second Kenyan on the list was Keroche Heiress Anerlisa Muigai, who was ranked position 30 in Africa, charging $4,000 per post (Approximately Ksh440,000).