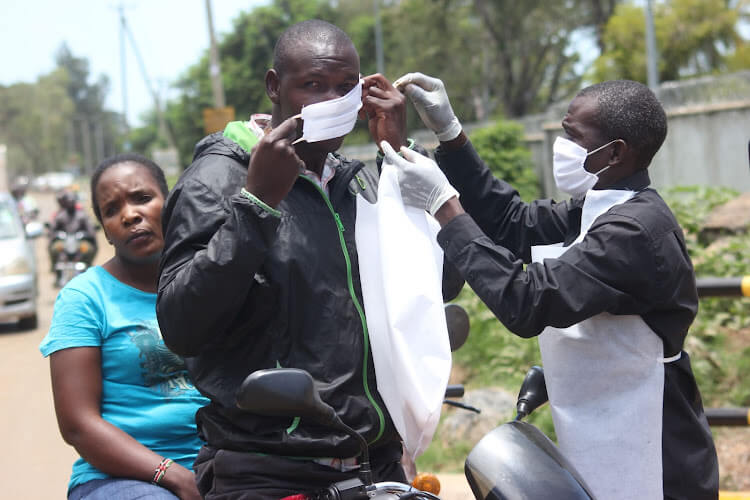 Exactly two years ago on March 12, 2020, the first case of Covid-19 was reported in Kenya. This grim announcement would usher in a huge opportunity for Kenyans, the monied and hustlers alike - the sale of face masks.

While the monied won tenders worth millions of shillings to supply the government with masks and an assortment of Covid-19 safety materials, the hustlers were busy at work collaborating with manufacturers to get a slice of the profits from this in-demand product.

In the initial stages of the pandemic, a single piece of a 3 ply mask was retailing for up to Ksh250 in Nairobi. The inherent fear of catching the deadly virus, the strict enforcement of the containment protocols by the police and the apparent scarcity of masks gave Kenyans no choice but to part with whatever amount a retailer wanted. Many made a killing.

As the months went by and there was increased supply, prices would fall to Ksh100 and down to Ksh50 as the home-made cloth masks were endorsed as offering near-similar protection.

A factory in Kitui would then start churning out face masks at the speed of a cough and that was that. At every matatu stage, outside supermarkets and shopping malls, you’d always find mask hawkers.

Soon a mask would go for Ksh20 and Ksh10 paving the way for even more hustlers with little startup capital to make a profit, and for many, earn a living solely from the sale of masks.

Towards the end of 2021 onwards, walking through Kamukunji  in Nairobi, you could get three face masks for Ksh10. A clear example of how the law of demand supply works.

Today, the government lifted the mandatory wearing of face masks in public places effectively bringing an end to the face mask business that may have been feeding some families for the last 24 months.

Seizing the Moment: Milking a Crisis

With the inevitable end of the face mask business, one cannot help but draw parallels with a particularly Kenyan practice of taking advantage of uncomfortable situations to make money.

Ever wondered where hawkers with pocket friendly umbrellas jump out from the moment there’s a hint of rain in the Kenyan capital?

These sharks are as industrious as they come. Most usually rush to large scale retailers who have been struggling to sell umbrellas and strike a deal within minutes before jumping on the streets where they go on to hit some serious numbers in terms of sales.

In 2013, a total solar eclipse in Kenya was not the only magical event that took place on the day. No sooner had the cosmic event kicked off than you saw quick-witted hustlers selling small film strips at Ksh10 that one could use to view the cosmic event without going blind.

The examples of Kenyans turning any kind of opportunity into a money-making venture are limitless.

If you have been to a funeral upcountry, you have probably come across the mobile photographers. Known for their aggression, this group of entrepreneurs usually hang around waiting for such an event.

Armed with their Nikons and Canons, they hover around the hosts homestead like vultures. They are soon clicking away and whether you had requested for the photo op or not, they just click away.

When it’s time to leave, you then run into 30+ pictures of yourself neatly taped on some bushy fence strategically located at the exit. One photo could cost anywhere between Ksh50 and Ksh100.

Fads: Grabbing Opportunities or Falling For the Bandwagon?

If you can make it in Kenya, you can make it anywhere. When it comes to taking advantage of  any kind of opportunity to make a quick buck, Kenyans have to be at the very top of the list.

This was the best example yet of how speculation can drive the market, with Kenyans jumping on the quail eggs wagon.

“Quail farming is the in-thing. The market for the birds is growing fast both as a source of meat and chicks for rearing. The eggs are also in great demand,” George Andanje, a poultry farmer told The Standard during a 2014 interview.

The quail narrative then went viral on social media platforms, with a single egg going for as much as Ksh70 and a day-old chick retailing at Ksh470 during the early days.

These expensive eggs were said to be remedies or at least touted to provide relief for some common medical conditions such as high blood pressure, arthritis and even HIV.

Countless articles were soon circulating on line touching on the magical attributes of this tiny bird and its eggs. This saw a huge number of poultry farmers ditching the trusted chicken and plunging head first into the ‘lucrative’ business of quails.

The surge in demand led to some crazy prices, with a single quail egg going for as much as Ksh105. The early adopters reportedly made enormous profits.

However, the craze simmered out without as much as a whisper. This is the typical life cycle of a fad.

Fads are behaviours or objects that achieved quick popularity but fade away as fast as they came. They are sudden, spread quickly and are short-lived. There are all kinds of fads; fad diets, clothes, hairstyles, toys, games etc.

And, probably what any discerning entrepreneur should be worried about are fad business ideas. The allure of quick profits with little startup capital and an almost instantaneous breakeven period can blind one from the necessity of due diligence.

As the excitement simmered in the quail fad, a quail meltdown soon took over. So many Kenyans jumped on the wagon, paying little regard to the fact that any business venture needs to be vetted and proper research carried out before any kind of capital input.

The price of the famous egg plummeted to less than Ksh10, with many dubbing the entire quail egg fiasco as an elaborate Ponzi scheme.

Innovating During a Crisis in Kenya

Words that use Chinese characters in Japanese have the characters’ meanings embedded into them. And the word for “crisis” turns out to be very positive in Japanese!

危機 (“Kiki”) is how it’s said. But taking each character apart shows a whole other picture. The first character (危) means “dangerous” while the second (機) means “opportunity”.

This is what a crisis is after all. It is dangerous and most probably scary, but it also offers an opportunity, a chance for change and potential for growth.

Take the Covid-19 pandemic as an example.

The restrictions and measures that came with it hit small businesses hard. Working from home meant people rarely left their cozy apartments. Car wash premises were as dry as the desert, until some quick thinking birthed the mobile car wash craze that is currently being witnessed in Nairobi.

The ‘mountain has truly come to Moses’ as Kenyans are now having their cars professionally cleaned from the comfort of their own homes.

This has also seen some similar adaptations in the world of barbers and some beauticians.

Any form of crisis should be treated as an opportunity, however, research and due diligence must be carried out before investing your money, lest it cracks as fast as those famous quail eggs.