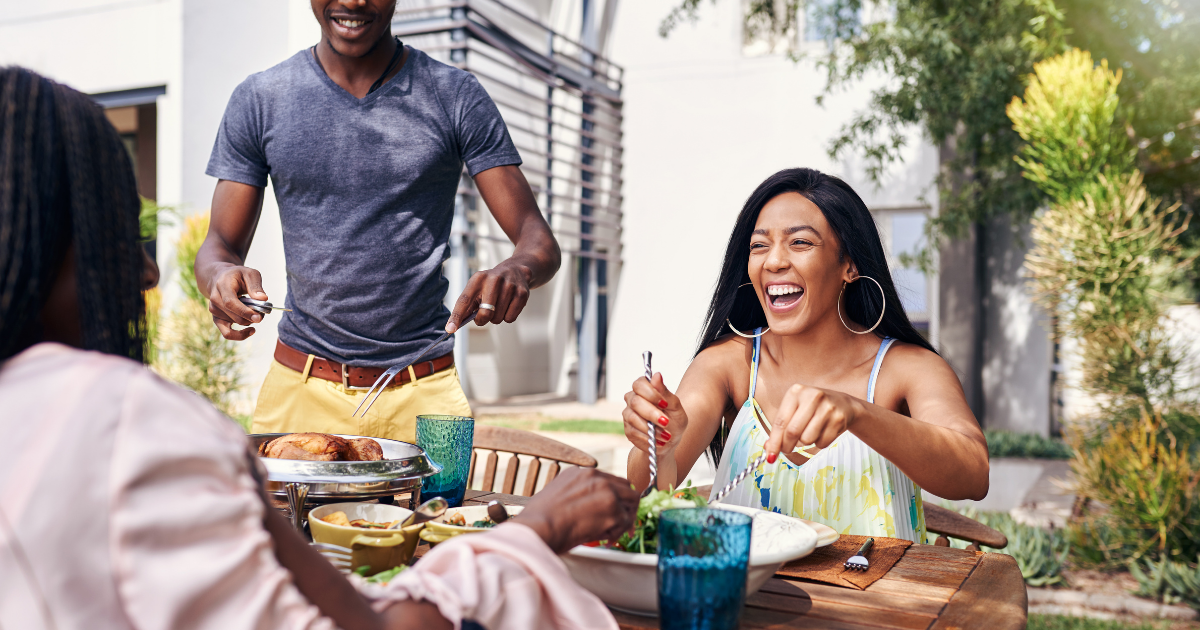 It's quite inanimate, and a tad juvenile - but I'm lining up for this buffet with a vendetta. I'm quite upbeat. Yes, like a general going to war. I've done due diligence, a bit of mission recce. I know what to skip, what to pick. For the plates are fancy, but quite small.

I'll definitely skip the Matoke. There's plenty of rice - plain, coloured spotted with chunks of beef. I've had enough of rice in 2020. Sometimes, it's all I had on my table. This buffet is the only fun part of our family's annual Christmas reunion. I want a bit of steak chops, bacon, macaroni. A year's worth of fancy food.

Two places up ahead, Cousin Stacy is holding up the line. She's on a call, with a plate in hand. You know that kind of people whose life pauses when they get on a call? That's Stacy. She's using AirPods, her phone is in her handbag on a table a few metres away. She's in her early 20's, but the things she's saying in that call, wueh!

Stacy's four-minute conversation is riddled with abbreviations: CIF, FOB, DAT, DAP.... She promises to 'call back in a jiffy', and the buffet line starts moving. Later on, I realised Stacy had been talking to her shipping agent in Singapore. A girl in her 20's already shipping automobiles from Singapore.

As I weave around to find the farthest table, someone calls out - TUPAC! It has to be me. I'm the only one in this crowd rocking a Tupac Shakur-branded T-shirt. It's my cousin, Benja, calling me out. He's such a vexing loudmouth. He'd done that exactly a year ago. I had the same Tupac Shakur T-shirt, now it's quite faded. I move to his table, he's sipping from a Soda bottle.

Benja is cool. We survived high school class to class, with Benja. He's the Mizinga-plug type of guy in family functions. After school, we had both gone to the city. I had found work at a car wash off Thika Road, Benja had joined his father's real estate firm in Kilimani. He rolls around in a blue Subaru.

"Ah, you guy," Benja howls, clapping me on the back as I settle into my seat. "I love Tupac".

Benja stretches out the L word, in that characteristic social media influencer twang - "Loooove...." He has quite a following.

I pull out my phone, and place it on the table. It's a basic, quite banged-up 'TRR TRR' mobile handset. I had bought it off a hawker for seven hundred shillings. Benja eyes it for a second, and in a patronizing tone, goes:

I'm trying to get a layer of bacon painfully trapped under a few chicken wings. My plate is full, it's not time for banter with a clueless rich kid.

Lest you flinch, that's not said in spite. It's an insufferable thing to endure in family gatherings. See, half of this crowd lives in the city, and so do I - sometimes within less than 10km from each other. Yet, no one really cares enough to look up the other.

How is he doing in Kayole? How is Mike doing in Utawala?

As I gnaw on my chicken wings, I glance around. Cousin Stacy is taking photos of the buffet table. She's doing it for her social media pages. She had ordered most of it online, and paid. There's a lot of selfies.

How do I ask Benja why he never picks my calls while in the city? How can we talk about jobs, while I've been jobless for most of the year? That there's a month I've lived in a shed at the car wash as my rental room in Soweto had been locked? It'd be difficult for Benja to understand how I'm rocking the same T-shirt in two family events - one year apart.

Oh, shoot. It's time for the speech. It's Grandpa's moment. He waits all year, gathers his brood from across the country - and checks on their progress and welfare. He's quite tipsy. I hope he doesn't mention that he'd sent me bus fare.

In a different world, Grandpa would have been the G.O.A.T of stand-up comedy. In a few minutes, he has the clan rolling in laughter.

The old man's 'State Address' - as he calls it - usually dwells on four pet subjects: Marriage, Fertility, Weight and Employment. Oh, behold, I've been measured and found severely wanting in every one of them.

I ain't married, yet. He'd made that remark on my third year away in Nairobi. It's now a decade. On fertility, he'd told me NOT to be like Mike. My cousin Mike had sired several kids around the village, out of wedlock. I could see a sinister twinkle of pride in his eyes, the Old Fox! It was a subliminal message. Am skinny, but, thankfully, so is he!

Every other minute, Grandpa would sweep his gaze over the assorted cars parked under mango trees in his vast compound. He's a proud octogenarian.

A pang of guilt hits me, as I really notice my faded T-shirt. Tupac Shakur would be embarrassed.

What I'm I doing wrong in Nairobi? What secrets have younger relatives unlocked that I didn't know? How do I get an opening? Do I make a placard asking for work and stand on a major highway? I have the papers!

As you gear up for Christmas gatherings, have an open mind. Often, family members use it to gauge self growth. It'd be prudent to avoid the pressure to prove yourself, if you are still trying to etch it. Else, such meetings will leave you physically and emotionally drained.

The flipside, is that Christmas gatherings bring a chance to meet influential members of your family, with their formal cloak down. It's the time to be candid. Make it a networking opportunity.

That successful maternal aunt in the hospitality business - ask for apprenticeship, or unpaid internship. They'll see your zeal and purpose, and honesty in admitting that you are struggling in the city. If you are good in business, present a good proposal. Maybe, you could land the seeding capital you need.

That uncle that asked for your CV a couple of years back and never got back? Give him an updated resume - and, candidly tell them you are still seeking for an opening.

Oh, still - don't overfill your plate at the buffet table. Make a modest serving - and get back for a second helping!