Money & Me: Saving Vs Borrowing For Wedding, I Have Something Better 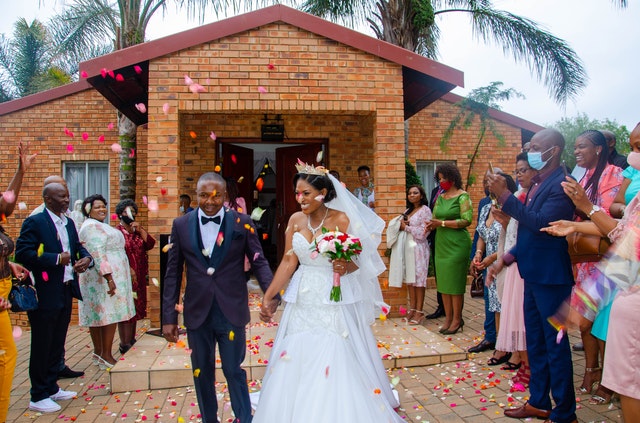 Well, I recently did and let me tell Maina...it was bloody, figuratively speaking of course. By seeking out trouble and violence I’m not talking about walking into a bar full of Arsenal fans with a Champions League medal, I’m talking about the relationship kind of trouble.

I don’t know about your personal experiences but from past experiences as well as crazy stories from good friends, money has been a recurring theme.

I’m guessing this is why if you take a minute and google ‘money and relationships’ you’ll get about 3.83 billion results in 0.50 seconds. You’ll also probably come across some really cheesy headlines like ‘Top 5 Marriage-Killing Money Issues, Number 3 Will Shock You’.

However, you will rarely come across practical stuff. Talking about money with your spouse every day after dinner can’t be the universal cure to relationships, at least not to mine coz I tried that and abandoned it like a sinking ship after just three days.

I remember it vividly. A lazy Sunday afternoon, smack in the middle of June. I probably should have waited till the warm weather season to unleash the chaos I was just about to, but I didn’t.

Pendo was in a really good mood so I decided to just go for it. The pandemic, plus having to move, downgrade my lifestyle etc. had turned me into captain braveheart. That is the only way I can explain what I did.

“Babe I need to tell you something...I paused for dramatic effect...I’m not going to marry you...another pause, this time a second or two longer...I just can’t.”

Now, for the sake of context, this was the woman I had professed my undying love to over the last 4 or so years. She had been with me through a lot of stuff, helped me grow, helped me get my financial health out of ICU, and all that.

In return, I had boko haramd her as she aptly puts it. I had ‘kidnapped’ her if you like.

This was why her face turned pink before I was even done with my dramatic statement.

“I just can’t marry you in church...I think we should seriously look into the whole Attorney General option,” I added while passing her my phone.

After hurling my phone across the carpet, a few friendly jabs on my arm as well as friendly curses, she finally calmed down enough to actually check my phone.

Wedding on a Budget

On it were several images of a happy-looking couple that had just got married at the government office in Nairobi as well as a caption on how much the entire thing cost.

I could tell Pendo was surprised but I was quite sure whether it was the price or the fact that I wanted us to go down this route.

I have never won the lottery but I have a pretty good feeling that what I felt at that moment surpassed the lotto one.

I had seen so many people go for the garden wedding despite the fact that they were running on financial fumes, and none of their unions ended in fairy tale fashion. Being true to self, especially on money matters is hard but critical for success, happiness or whatever you want to call it.

One of my friends, let’s call him Jimmy, was the one who imparted that lesson on me by making that particular mistake for me. Pressure from the bride to be, which was created by the in-laws (as we later came to learn) led him to make the cardinal sin, he took out a loan to cater for his wedding.

Against my advice and many others, he just did it. His argument was he would be able to cover it off once some deal he was about to close came through. Keywords were ‘about to’.

As you’ve probably guessed, the deal didn’t materialize and there he was, with a grumpy wife, ruthless debt collectors and 4K clear photos of his honeymoon in Zanzibar.

We joke about it now but things were really bad for Jimmy back then.

How Much Does it Cost?

I think now it’s clear why I was so happy that Pendo was on board with my plan. Was this her ideal scenario, nope. No girl grows up dreaming of the AG’s office - if anyone says that, you should run for the hills, trust me.

Many group up dreaming of a happy life which to some could be in the form of a happy marriage/family, others a fulfilling career, others even end up with both. You catch my drift.

Pendo is the pragmatic one in our relationship, and I’m the dreamer.  Which is how we ended up spending the rest of the afternoon looking up the requirements for an AG wedding (Civil Marriage) in Kenya.

For starters, we would need to place a 21-day notice before the actual marriage. Before planning a civil marriage one is required to specify whether it is under a notice of a special license. As is the case with most Kenyan nationals, Pendo and I fell under the ‘notice’ category.

On the day of the actual union, we’d need our IDs (plus copies), plus colored passport photos. According to the government website, this would set us back Ksh3,900.

Now if for some reason Pendo decided that 21 days was too long a wait for her to take my last name, we could go for the special license category (same requirements) which cost Ksh9,700 and a valid reason as to why we can’t wait 21 days.
I still remember Pendo’s laughter when I read out that last part.

“What if the world ends, Kesho? That’s the reason I’ll give them,” she said. We both laughed.

To give it a ‘wedding feel’ we decided on our special witnesses whose travel expenses we’d cater for, plus a small soiree with an invite-only guest list. Our initial budget estimate came to Ksh50,000 for the entire event including a deejay (who is not being paid via exposure, just for the record).

You’d be amazed at the savings we made just by going through our contact lists. The Deejay and I  go way back (meaning he was practically offering to do it for free), the caterer is Pendo’s bestie...The photographer is a colleague.

I totally get the whole, your network is your networth thing now...ama I’m totally out of pocket? If I am, just focus on the key takeaway, use your networks effectively.

So here we are, our wedding year. There’s just one thing left, telling our folks about our grand plan. What could possibly go wrong, huh? I’ll tell you all about it once we cross that particular bridge.