Money and Me: The Valentine Mghoi Story 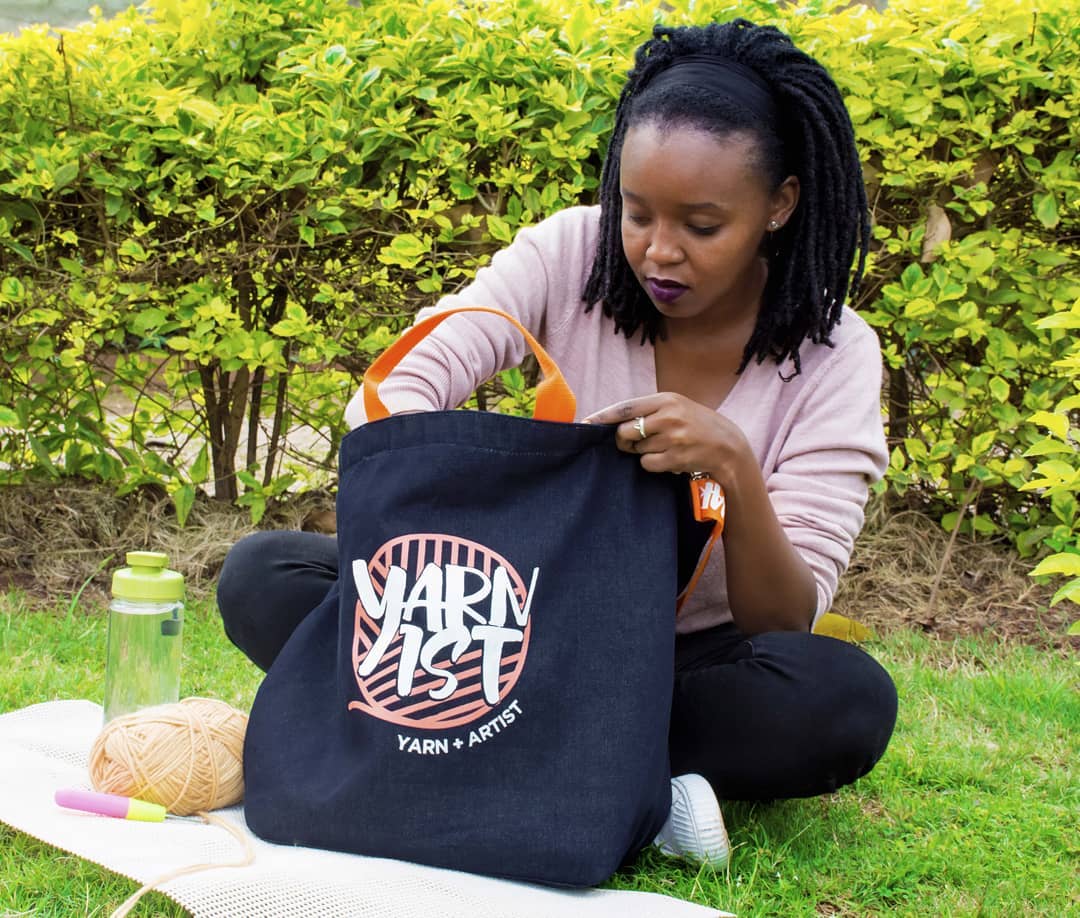 The Yarnist: Valentine Mghoi poses with a sample from her line of handmade bags. PHOTO | MATS BY VEE

It has often been said that the two most important days in your entire life are the day you are born, and the day you find out why.

This rings true for Valentine Mghoi. Founder and CEO of MatsByVee, the talented entrepreneur has been making waves in the customized mats industry, after experiencing her light-bulb moment and the decision to follow her gut.

Despite my efforts to structure my approach after she agreed to sit down for this interview, her candor, charisma and the magic tucked inside a flask of home-made tea, our conversation took a life of its own.

Her apartment was the venue we settled on. Something about the creative mind needing the ideal environment to thrive was mentioned, and my ‘structured’ proposal to have it at some coffee house was thankfully discarded.

So here we were at her meticulously decorated balcony garden. I found this to be a tad bit poetic as her hands are the very reason we were here.

Her rectangular-shaped balcony is brought to life by a neat row of potted veggies that bring out an unmistakable smile. A sort of ‘I did this with my own hands’ look of pride is strewn across her face.

There’s a really authentic coast-themed mkeka laid out neatly on the balcony floor, “It reminds me of Mombasa, my home town,’ she says as she ushers me to one of those outdoor sisal seats - you know, those that make you feel like a proper mtalii.

She sits on a throw pillow, legs crossed like the daughter of the ancient towns down at the edge of the Indian Ocean that she is.

Let’s Start By How You Turned Approximately Ksh2,000 Into This Thriving Business

She cuts a pensive look, through her purple horn-rimmed glasses, her eyes tell she’s travelling back in time.

I always watched keenly as my aunt toiled making handcrafted mats for years. My incessant and unending questions meant I quickly became her student – if only to shut me up, haha.

This was back when I had just joined Form 1 – feels like a lifetime ago.

Funny thing is that I had all the skills and tools I needed to kickstart my business for decades. Even during those dark times that were characterised by living hand to mouth in every sense of the word.

But I can tell you for free that timing is everything.

I started out by crafting mats for my own home décor.  This is how I actually ended up learning the costs in terms of my tools of trade.

I raised this money from my freelancing graphic design job - that’s my 9-5 job to this day. A good friend also chipped in with some money and the rest is history.

Initially, it was not supposed to be a business, just a hobby that allowed me to create my own home decor.

However, after sometime during which I crafted a lot of personalized gifts for my close friends, I decided to monetise the venture. This is how I ended up marketing my work on my Facebook page.

A few years later I opened a dedicated Facebook page for my craft.

I can't say I handled money from my sales well when I first started. I was still living hand to mouth.

Working as a freelancer (graphic designer) all day meant that I spent my free time honing my craft as a Yarnist - Yarn Artist.

Haha, yes that’s a new word I coined to describe my line of work.

It's been a learning journey when it comes to handling money coming in from mat sales.

I remember the very first time I pitched my wares to a prospective client. It’s one of those memories that stay with you for life.

Firstly because I couldn't believe that I had actually landed my first order, and secondly because of what actually happened after.

I may smile and laugh now but it almost broke me.

So, I presented the idea to the client, she was happy with a small sample piece that I carried around in my bag and shared the colours she wanted.

We settled on the design and when I presented my costs to her we settled on a size that would cost Ksh6,000.

I did not ask for a deposit to buy the materials needed -big mistake. But I did it simply because I was walking on eggshells and couldn’t fathom the thought of ruining my first order.

Weeks later when I was done and delivered the piece, she was thrilled with the work but when I asked for my dues she was ready to pay Ksh600….as in Ksh600!!

She said that she had misunderstood and thought it would cost Ksh600 from the onset.

Long story short, I left with my rug and wondered about the lonely streets of Nairobi for a while not knowing what I would do.

Wow, that’s really something…she shows me the actual rug or the ‘600 bob rug’ as she likes to call it.

What is the Biggest Challenge You Face in Your Industry, Aside From The Ksh600 Squad?

This has to be facing business copycats on a daily basis.

I put a lot of time, research, thought and strategy so as to make my mats stand out from what was already in the market considering it was not a unique business on its own.

But making my brand stand out has not been easy, and just seeing someone copy paste your exact moves stings. I'm getting through it by telling myself I am forging a new path for Yarnist. I believe there’s enough cake for everyone...Faith in myself also helps with that.

There was this time when the burning idea of a design would not let me sleep.

I wanted to execute but it was not a custom order. I had put off the idea for quite a while till the artist in me just decided to go for it. I went into my pocket to buy materials, sketched my idea down and went to work.

I loved the outcome of my project, it was called the Almasi rug. It found a home in Seattle a year later. Funny how things fall into place if you just decide to take a leap of faith.

This taught me to trust my instincts as a designer and put my ideas out there.

Ok, let me get the cliché question out of the way.

What Would You Tell a 20-year-old You When it Comes to Finances?

Also, the backaches from making the mats will pay off. Those crazy ideas you have is what the world needs. Fear not.

Invest in yourself as much as you can.

Over the years, I've invested into my business by taking some courses on business management and marketing.

I've learned how to save my enterprise funds and separate it from my other sources of income.

It started simply by having a separate sim card for my business where I took advantage of M-Shwari and saved my money.

“Perfect timing. Meet Thanos and Amara. They are part of my crew,” she says as two furry creatures waltzed in and got cosy on some of her mats.

Yep, Thanos is a cat, Amara as well. I’m more of a dog person but I quickly got acquainted with the two MatsByVee personnel.

“Funny story. These two legends have been huge when it comes to sharing my handcrafted mats on social media platforms,”

“They are the stars when it comes to generating engagements on my platforms,” she explains, her face beaming with pride as she pets Thanos.

I don’t know how to follow up after that which is how I end up asking how the pandemic has affected her business.

“To my surprise it had such a positive impact. One that I can't take any credit for because not in my wildest plans had I foreseen this. 2020 was the year in which I made my biggest sales to date. I attribute this to the fact that people were at home more, and got into home improvement projects of their own.

She wraps our conversation up by telling me that making pieces from original designs just like the Almasi is what she is looking forward to doing, going forward.

She’s also working on my movement called The Yarnists aimed at bringing pride to the yarning business.

“Many people tend to cheapen the products and say it's a craft for old people. I'd like to change this mindset,”

I am utterly convinced that she will.