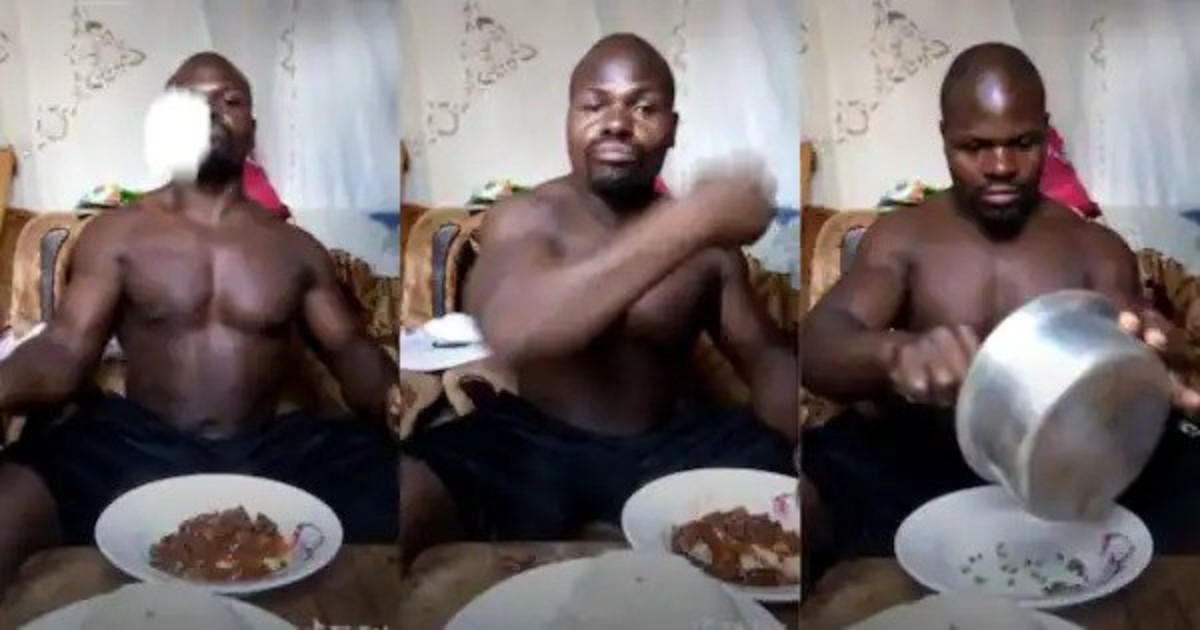 Charles Odongo alias "Ugali Man" demonstrating the 'pro level' of Ugali eating in a video that instantly made him an internet sensation in Kenya. The prices of maize meal are set to stabilise a week later after an unprecedented spike following the tax waiver on maize imports.

Following weeks of negative and unwelcome news over the month of June, the last week has witnessed a turn for the better.

There was still a good amount of news that will hurt the pocket of millions of Kenyans, but it was a more balanced week with some good news as well.

For example, the price of Unga is set to go down in July 2022 after the national government stepped in to curb the tide. However, millers have already poured cold water on this possibility stating that the net effect of the government's latest effort have a negligible effect on the sale price of maize flour. Fuel prices could also go down as well, with a plan in place to see this effected as soon as August 2022.

Financial inclusion in Kenya is also set to improve with a new entrant in the mobile money sector announced over the last week.

All the above, plus other finance related news that made the headlines around Kenya are explained in detail below.

On June 27, Kenyan mobile service provider Telkom Kenya unveiled plans to launch a mobile loans service as part of its drive towards a diversified portfolio.

Available through its mobile cash unit – T-Kash, the telco further revealed that it would be partnering with an unnamed financial institution in this new venture.

Christened the ‘Silicon Savannah’, Kenya has witnessed an explosion in the mobile money sector ever since Safaricom launched M-PESA in 2007.

Central Bank of Kenya (CBK) data showed that by February 2022, there were 67.94 million registered mobile money accounts in Kenya for a country with a total population of just over 55 million.

A 2021 GSMA (an international association for mobile network operators) report showed that nearly 4 out of every 10 Kenyans accessed mobile money to secure a loan, the highest number across the world.

Still on mobile money, a World Bank and KNBS survey reveals that the number of Kenyans taking up loans to raise income increased to 55% in March 2022, up from 13% in February of the same year.

The Covid-19 pandemic had a devastating financial grip on the Kenyan household which has been recording a steady increase in the overall personal loans.

Requests for borrowers’ profiles from credit reference bureaus (CRBs) hit a record 39.8 million in 2021 as lenders mounted a campaign to reduce the increasing rate of loan defaults.

CBK data also showed that 14.1% of all loans were defaulted by the end of April 2022. One of the highest percentages ever recorded over a 12-month period.

In accordance with the Finance Act 2022, a 10% excise duty will now be charged on all cellular phone imports. In addition, all imported ready-to-use SIM cards will now warrant a Ksh50 excise duty.

The two new duties were last-minute amendments to the Bill which were adopted by Parliament and signed into law by President Uhuru Kenyatta.

The new tax means consumers looking to replace or register new SIM cards will have to pay more.

Industry players have said that the price for the end consumer is going to go up by over 10%, as they still have to factor in VAT.

The taxman explained that the new measures were aimed at raising new revenue rather than protecting a non-existent local industry.

According to data from the Communications Authority of Kenya (CAK), over half a million new mobile phones were activated between January, and March 2022.

One of Kenya’s most popular cars – the Toyota, is taking a major hit in the second hand market, with Kenyans opting for other cheaper car manufacturers and models.

According to car dealers, Kenyans are now going for vehicles such as the Nissan Sylphy and Mazdas, which are less costly when compared to popular Toyota models.

For example, the price of a Toyota Premio has now spiked to an all-time high of Ksh2.2 million, a price at which one can get up to 3 Mazda Demios at car yards in Mombasa.

A Nissan Sylphy (Blue Bird) is now going for Ksh1.5 million, which is Ksh 700,000 less than the Premio, thus offering significant savings to Kenyans who are still trying to find their footing during the harsh economic times.

The rising cost of vehicles in the country has been linked to the dollar scarcity as well as the weakening Kenyan currency.

Relief for Kenyans at the Pump

On June 28, State-owned National Oil Corporation of Kenya (Nock) announced that it would start shipping fuel from Saudi Arabia at lower prices than the global rates.

The government-to-government deal with state-owned Saudi Aramco is aimed at lowering the prices at the pump.

“We already signed the MoU and the next phase is negotiating the contract terms. We are waiting on them as from last Sunday.

“The plan is to start trials in August, for two months and see the impact of the exclusive prices that Saudi Aramco will be giving us. Then we will fully start in October.” Nock Chief Executive Officer Leparan ole Morintat explained.

Cheaper Ugali on The Menu

Still on June 28, the national government announced a plan to reduce the price of maize flour that has been burning a hole in the pocket of millions of Kenyans.

Read Also: Most Expensive Ugali Ever Made in Kenya - Money Weekly News

Agriculture CS Peter Munya in a statement yesterday announced the suspension of all levies on maize imports.

“I have suspended all levies on imports for Maize and Animal feed products effective July 1, 2022.

This initiative is aimed at lowering the cost of maize flour and animal feed in the country for the next 90 days before the next harvest,” reads an excerpt from his tweet.

He further explained that the new measures would help in fast tracking the clearance of trucks at the border points where major snarl ups have been witnessed.

This comes a week after the price of a 2kg packet of maize flour hit an all-time high after crossing the Ksh200 mark.

However, millers say the move will only have the effect of cutting the price of flour by a paltruy Ksh2 for a two-kilo packet of maize meal.

The United Grain Millers Association (UGMA) say since a 90-kg bag of maize is charged a levy of Ksh100, and with such a bag producing 36 packets of 2kg maize meal, the suspension of the levy will only reduce the cost by just Ksh2.7.

Over the last week, the price of a tray of eggs has jumped to Ksh450 from a relative average of Ksh360. In some of the leading supermarkets, the price goes as high as Ksh 500.

The latest spike has been attributed, in part, to the high cost of feeds (which typically include a significant amount of maize) and a shortage of key protein supplements such as sunflower cake and soya, which are hardly found locally.

The most significant cause for the increase in egg prices is the imposition of a 25% excise duty on imported eggs with the country relying on hitherto cheap egg imports from neighbouring Uganda.

It is a bitter-sweet moment for consumers and farmers in the country as local farmers hail the government’s protectionist-esque measure that will see them reap more as consumers dig deeper into their pockets - at least, in the medium-term.

It is worth noting that as recently as May 2022, the price of eggs had dropped by 20% following an increased supply that outpaced demand amid low purchasing power.

Failure to comply with the new directive could lead to fines as high as Ksh1 million or even Jail terms.

Kenyans have since taken to social media to vent their frustrations with the price of the new machine at the heart of most complaints.

“The new ETR machines are 50k, the previous one was 25k, I have two companies that need ETR’s that’s 100k, it’s so punitive to just create expenses without considering the current economic situation”. @Emma999Too tweeted.

The bill sought to order a form of shelter for unemployed graduates facing repayment challenges.

"This provision will adversely affect the sustainability of the Higher Education Loans Board as a revolving fund.

"Delayed commencement of repayment will reduce the amount recovered by Helb as well as decrease the number of students funded by Helb annually," the President stated.

Had he signed off on the Bill, unemployed loanees would have been given reprieve from repayment, until they secured jobs.

President Kenyatta argued that under the proposal, the major challenge would be determining the income of graduates who are not in formal employment.

"Those that are self-employed are not likely to declare they are generating income and are likely to fail or delay repaying their loans," he stated.

You Can Now ‘Grab’ Govt Land

“We are not going to discriminate against individuals who want to invest in these lands, however, the person has to show us proof of being an investor as well as having a certain amount of money to lease the farm,” Agriculture and Livestock PS Harry Kimtai explained.

The PS had been tasked by a special committee chaired by President Uhuru Kenyatta, to come up with a leasing framework that would allow private firms and individuals to start commercial farming at state-owned farms.

This model will allow thousands of idle acres of public land to be leased to private investors for food and cash crop production that isn’t necessarily reliant on rain-fed agriculture.

Some of the parastatals holding large tracts of idle land include the Kenya Railways, the Kenya Broadcasting Corporation, Kenya Prisons, among others.