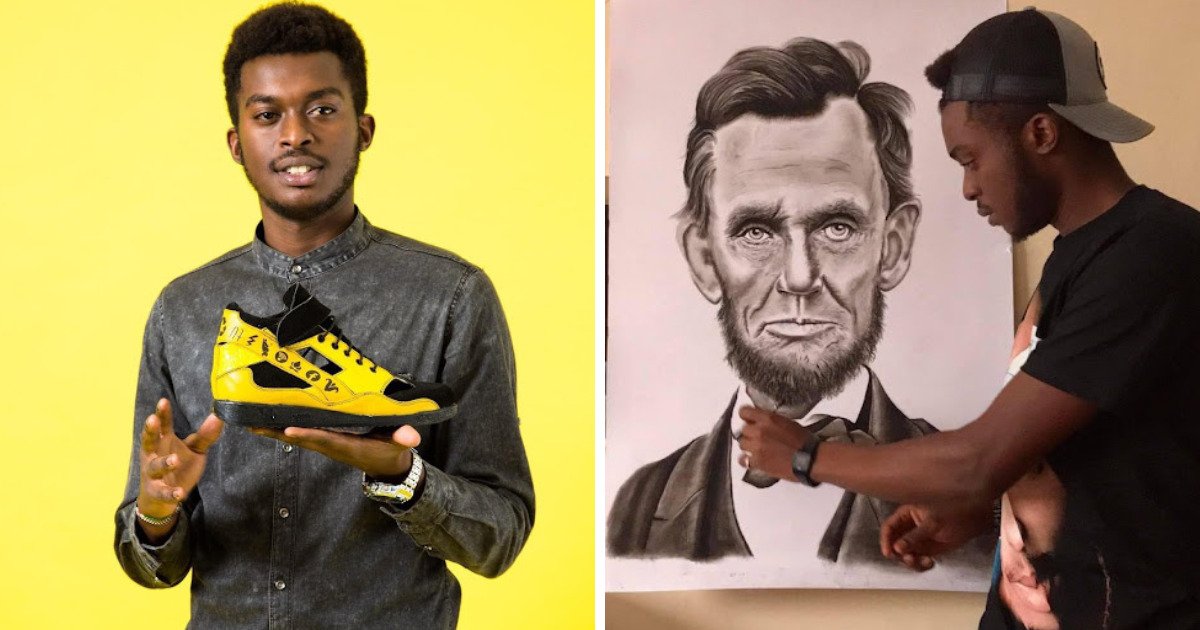 This article was originally published by Qazini, an online media platform that is seeking to drive systemic change in our societies through empowering storytelling.

In 2019, he was crowned winner at a global shoe design competition organized by Bata, who were celebrating 125 years as a global footwear brand. In the following year, he won the best design for #ArtoftheCity, a campaign created by ArtCaffe to design their takeaway cups. He is also a visual artist. The very measured Kharsh met Ken Okumu at ArtCaffe for a catch-up over a cup of coffee served in the takeaway cup designed by him (Cyprian).

At what age did you discover you could draw?

As early as six years, maybe seven. It became noticeable, however, five years later when I would occasionally be called upon to draw charts and diagrams to be used for illustration. You know, the human reproductive system in primary school science and the likes. I wasn’t that serious with it though. I just happened to be that kid in school who could draw.

Were your parents supportive?

They were! They would buy me drawing books, watercolour paints, etc. Anything that would help me hone my skills. That is something that I am grateful for. Parents should see innate gifts in their kids and start supporting them at an early age.

When did you start getting serious with your art?

One day while in high school, I brought home a report card that read 2/30 in an Art and Design exam. My dad looked me dead in the eye and asked, “Is this what you want to pursue?” The look on his face stirred something in me. I knew I had to get serious.

So yeah, that encounter was the turning point for me, and also overall, being in a school that offered Art and Design did help.

Any notable successes at this level?

The ones that stood out for me were two: First, I won a competition by Bic and Insyder magazine where the requirement was to make a drawing using a Bic pen.  It was an exciting moment for me. You know getting featured on Insyder, at the time, was like being on the cover of say, Vogue. The only downside to it was that whoever was in charge of the rewarding system pulled out their best Kenyan politician impression. The prize money vanished into thin air.

And second, my high school project was so good that the external examination supervisor came to our school looking for me.

I assume that your art began to develop better wings after you were done with high school?

Yep. I joined the University of Nairobi to pursue a Bachelor of Arts in Design. In my second year at the university, I began trying out exhibitions. I tried out the Manjano exhibition but unfortunately did not make it to the top three. Thankfully, such setbacks only emboldened my resolve.

I grew more aggressive and ended up exhibiting severally at The Nairobi National Museum.

We’re sipping cappuccinos from the takeaway cups that you designed. That makes you very proud, doesn’t it?

Very proud. Nairobi is special. It is the only city in the world with a national park existing within it. That is what inspired my design. I wanted to create something that reflected the city of Nairobi. And I also got to exhibit and sell my art in Artacaffe’s biggest branch at Westgate. I won the competition, but the first and second runner-up had incredible artworks as well. The next time you’re in Artcaffe, ask them for a variety of the #ArtoftheCity designs.

Tell me a little bit about the global shoe design competition

I was informed by my lecturer that there was a Bata Young Designers challenge. I found it a bit odd that my lecturer had sought me out considering I had majored in unconventional illustration, and the competition was specifically for product designers. When you get to your third year, you can specialize in one of the five following areas; Graphic, Interior, Product, Fashion, and Illustration designs.

Nevertheless, I decided to take on the challenge. Now, I was required to make a drawing of the shoe, select material, and create a prototype. Oh, and also come up with an outfit to go along with the shoe. It was a tedious process that culminated in me being one of the two finalists from Kenya.

We had to travel to Prague to meet the other finalists from Italy and the Czech Republic. We competed and the judges ended up selecting a winner from each country. Luckily, I won.

Would you say the competition gave shape to your career?

I never thought that I had it in me to design shoes. So, yeah. I’m now a footwear designer at Enda, thanks to that challenge.

Tell me more about Enda…

Enda is a proudly Kenyan running shoe company. The first of its kind in the continent. We make performance shoes, running shirts, and other apparel.

You are also a portrait artist. How much do you charge for a piece?

I have an online art shop with a pricing list. It’s called The Kharsh Art

What next for you?

I’m hoping to complete my masters in product design and also continue to design more shoes to compete in the global market.

Your major in Illustration is now done and dusted?

Not really. I have illustrated a book titled The Adventures of Hilda the Cat and Friends that’s available on Amazon. I’m open to more illustration opportunities.

I saw your art on Manchester United’s Instagram page. That must have been a proud moment

Oh, I had forgotten about that. Yeah, it was. It was surprising. Chevrolet, the official Manchester United shirt sponsor, got in touch and asked if they could share the image, a year later after having posted it online. (Chuckles) Of course, I said yes.

Art is subjective. Take negative comments on the chin and forge ahead. Sharpen your skills more. Take any lessons that you find along the way.