Just How Much Money Did Your MCA Make Since 2017? 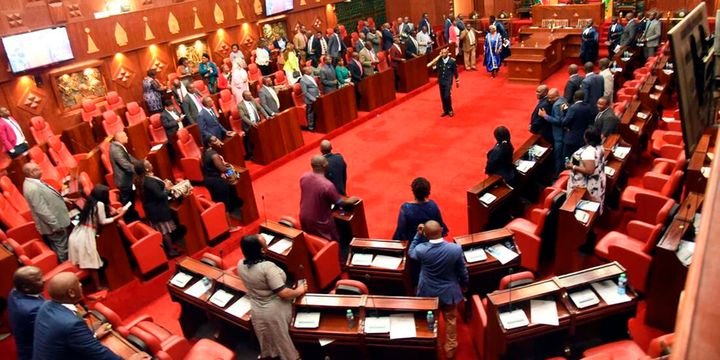 With just a handful of days to go before Kenyans take to the ballot, a group of candidates has been breaking records. These men and women are running for the highly coveted MCA seat in the next government.

For example, Muthara Ward in Tigania East, Meru County, has 27 candidates looking to become MCAs. A number which, according to data from the Independent Electoral and Boundaries Commission (IEBC), is the highest across all counties in Kenya.

Maua ward (still in Meru) is a close second with 24 contestants.

So what is it about this post that has seen it turn into a meme among Kenyans? Word on the street is if you are not running for the MCA position, or know someone who is, then your circle needs checking.

Looking At The Numbers

According to an article published by The Star on February 4, 2022, the nomination process for those seeking to become MCAs under the UDA party umbrella was charged Ksh50,000 and Ksh25,000 for male and female candidates respectively.

These figures are pretty much the same across most of the popular political parties, and could thus be used as the average nomination cost.

Moving on to the actual campaign, a 2021 report The Cost of Politics in Kenya 2021 released by Westminster Foundation for Democracy (WFD) in collaboration with The Netherlands Institute for Multiparty Democracy (NIMD) revealed that the MCA post was the most affordable in terms of campaign costs.

“The Senate seat is the most expensive of all the posts to contest for. It cost an average of Ksh35.5 million to contest for this seat in 2017. Contestants for the Woman Representative seats also spent significant sums, with the average expenditure reaching Ksh 22.8 million.

“For those seeking to become members of parliament the average spend was Ksh18.2 million, while the Member of County Assembly seat was the least expensive at Ksh3.1 million,” reads an excerpt from the report.

Now with the annual inflation rate in Kenya hitting 8.3% in July 2022, the highest reading since June of 2017, these figures could be significantly higher.

The rule of thumb is pretty simple as per the report, outspend your opponents and the odds are then stacked in your favour.

In 2017, Woman Rep candidates who won their race spent almost three times as much as those who were unsuccessful. Winning Senators spent more than double compared to those who lost. While in the MCA race successful candidates spent 50% more than those who ended up losing.

It is important to note that regions matter when it comes to the MCA post. For example, MCAs in Central Rift, Central Kenya, and Southern Rift spent the least on seeking election, compared to the rest of the country. It cost between Ksh 1.6 million and Ksh 1.8 million on average to contest an MCA seat.

It is, however, most expensive to run for MCA in Western and Nyanza regions where the average cost is over Ksh4 million.

Is it Worth It?

Once an MCA assumes office, just how much money do they make over the course of one term?

Prior to the recent changes implemented by the Salaries and Remuneration Commission (SRC) that will see the next cohort of MCAs taking a significant pay cut, these legislators used to rake in Ksh400,000 on average, per month.

This is broken down as follows;

If any MCA fails to attend eight consecutive sittings of the county assembly, they risk losing their seat. This is what takes the sitting allowance to at least Ksh40,000.

However, the amount could be even more depending on the number of sessions a particular MCA attends.

Assuming an MCA spent Ksh5 million on the campaign trail, it would take him 12.5 months to recoup his money using the Ksh 400,000 average monthly pay. However, it is important also to note that these ward representatives are usually bombarded with WhatsApp groups that need their contributions for projects almost every other day.

Other perks that come with the job are benchmarking trips to beautiful destinations around the world, as well as a recently approved car allowance grant.

As a recap, your MCA grossed at least Ksh24 million over the last terms (5 years = 60 months).

How Do MPs Compare in Earnings

Each of the country’s 416 lawmakers is currently entitled to a minimum monthly salary of anywhere between Ksh621,250 and Ksh750,000.

Their net salary averages at approximately Ksh685,000 per month after all deductions. This then translates to Ksh41.1 million for 1 Member of Parliament over the course of one term, in salary alone.

However, just like their MCA friends, MPs end up spending even more money once they assume office.

According to the 2021 Cost of Politics Report mentioned earlier in the article, MPs spend as much as Ksh780,000 a month: primarily on development projects for constituents and donations to local interest groups.

This is more than their basic monthly salary before allowances and benefits.

Following the latest review by the SRC under a gazette notice dated July 28, 2022, MPs' basic monthly pay has been reduced from Ksh532,500 to Ksh426,000, and their plenary sitting allowance of Ksh5,000 has been eliminated; however, they have been granted Ksh150,000 in house allowance, a new benefit.

This brings the total to Ksh710,000 per month gross salary.

As for the MCAs, the commission canceled the Ksh2 million grant for each of the 2,237 MCAs approved in February 2021.

Their sitting allowances were also abolished which means the Ksh40,000 they used to earn on average for attending at least 8 consecutive sessions per fiscal year will no longer be available to them.

Kenya’s public sector wage bill stands at 50% of annual government tax revenue, with the IMF setting the global benchmark at 35%.

According to the SRC, the total wage bill for the public sector reached Ksh827 billion in the fiscal year ended June 2020, a 34% increase from Ksh615 billion in 2016.

The SRC also declared that should the incoming legislators file lawsuits, it would defend its decision in court on the grounds that it made the new directive before the Members of Parliament and the Members of the County Assembly could begin serving under new contracts.